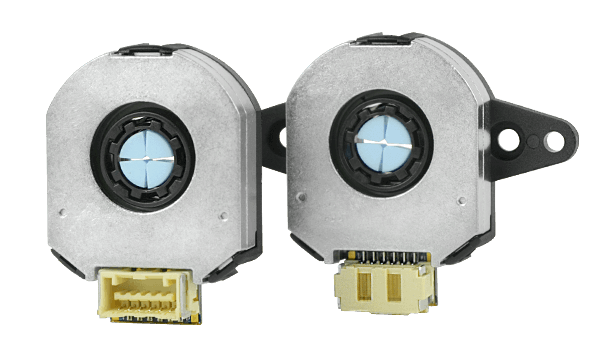 CUI Devices’ Motion Group today announced that its AMT21 series of absolute modular encoders has added models with multi-turn output capability. Offering 12 bits or 14 bits of absolute position information, the multi-turn AMT21 series implements a 14-bit signed number turns counter for applications rotating beyond 360 degrees. These features provide users with the ability to keep track of position even during power down conditions, while the turns counter can be maintained via a battery backup, eliminating the need for a homing sequence.

Based on CUI Devices’ patented capacitive ASIC technology, the AMT21 series is highly durable and accurate with resilience to the dirt, dust, and oil typically found in motion applications. Its high-speed RS-485 protocol for fast and low latency position data is accompanied by a low current draw of 8 mA at 5 V and a compact package with locking hub for ease of installation. Boasting accuracy of ±0.2 mechanical degrees, the AMT21 series further carries an operating temperature range from -40 to +105°C in either radial or axial orientations.

The digital nature of the AMT21 series also allows users to configure the alignment via CUI Devices’ AMT Viewpoint™ GUI or the encoder’s RS-485 protocol. Additionally, the digital interface of the AMT21 encoder can be used to set addresses for multiple encoders sharing the RS-485 bus.

The AMT21 series is available immediately with prices starting at $49.72 per unit at 50 pieces through distribution. Please contact CUI Devices for OEM pricing.